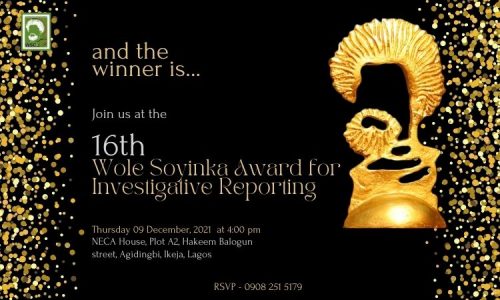 Veteran cartoonist and painter, Josiah Ajiboye, popularly known as Josy Ajiboye, the CLEEN Foundation, and 14 journalists are to be honoured at the 16th edition of the annual Wole Soyinka Award for Investigative Reporting presentation event scheduled for Thursday, 9 December 2021, at NECA House, Lagos, from 4pm to 6pm.

In a statement signed by the Executive Director/CEO, Motunrayo Alaka, the Wole Soyinka Centre for Investigative Journalism (WSCIJ) said Ajiboye, will be decorated with the Lifetime Award for Journalistic Excellence for his remarkably consistent professional exertions in form of timeless witty cartoons.

“His works, particularly in his years at Daily Times, which spoke to social-economic and political issues that bordered on social justice, kept the government on its toes as Nigeria struggled through the military era and they remain relevant even today.” The statement noted.

WSCIJ explained that he CLEEN Foundation will be honoured in the Human Rights field with the Anti-Corruption Defender Award for its over two decades work promoting public safety, security and accessible justice in Nigeria, especially around improving human rights and accountability mechanism within the Nigeria Police Force adding that the award underscores the great contribution of the late Innocent Chukwuma, CLEEN Foundation Founder, who strategically built the organisation to defend the rights of Nigerians to security.

The statement read in part: “As earlier announced, the 14 journalists shortlisted as finalists across the print, online, photo, cartoon, television and radio categories of the award will also be honoured for their stories.

“ Nine of the stories focused on Nigeria’s fragile security apparatus, covering extrajudicial killings, brutality by persons in uniform, human rights abuse, armed banditry as well as the broad issue of insurgency. In the light of this, WSCIJ alongside its civil society partners will be using the occasion to call the attention of the government to the need to urgently address the worrying state of security in the country.”

The finalists according to the statement are; Abiodun Omotosho of Nigerian Pilot, Benedict Uwalaka of Daily Trust, Ibrahim Adeyemi of Foundation for Investigative Journalism (FIJ), Kelechukwu Ogu of Rhythm 93.7 FM, Kunle Adebajo of HumAngle, Mary Abayomi-Fatile of Federal Radio Corporation of Nigeria (FRCN), Olatunji Obasa of Punch, Olukunle Akinrinade of The Nation, Omolabake Fasogbon of ThisDay, Sharon Ijasan of TVC News, Taiwo Adebayo of Premium Times, Tessy Igomu of Punch, Victor Asowata of The Will and Zainab Sanni of Agidigbo FM.

The Wole Soyinka Award for Investigative Reporting presentation event is held annually on December 9, the World Anti-Corruption Day and eve of the Human Rights Day, to acknowledge best practices in investigative journalism and call attention to its significance for attaining good governance, accountability, and social justice. 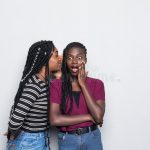 The Power Of Narratives – By The Nature Nurse 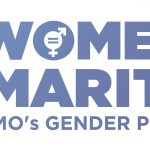