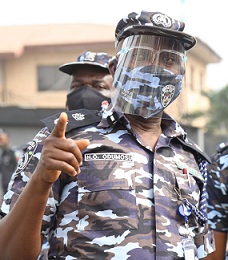 The Commissioner of Police, Lagos State, Hakeem Odumosu, has vowed to sniff criminals out of their hideouts within the State as he ordered Area Commanders, Divisional Police Officers and tactical Commanders to embark on massive raids of criminals’ hideouts across the state.

The Commissioner made the declaration recently while addressing senior officers, Divisional Police Officers and Heads of Departments at the POWA Hall, Oduduwa Ikeja-Lagos, on the general security of the state and the need to be proactive to security issues in Lagos State.

According to a statement signed by the Command’s spokesman, CSP Olumuyiwa Adejobi, the Police boss emphasized on the benefits and fundamentals of raids and constant monitoring of human conducts within their respective areas of responsibility with a view to taking charge of public space and providing adequate security for all and sundry in the State.

Odumosu ordered the Area Commanders and Divisional Police Officers to enforce the orders on the use of tint permits, siren and Police SPY Number plates as reiterated by the Inspector-General of Police, IGP Usman Alkali Baba, to reduce crime to the barest minimum in the state.

He noted that existing tint permits remain valid while only new vehicles with factory fitted tints are exempted and vehicles with other forms of tints, other than factory fitted, be impounded while the owners are apprehended and charged to court accordingly.

He explained that approved police SPY number plates must be fixed and used on registered trucks-Pickups not on private SUVs or cars. The Commissioner restated that anyone who violates this order and does not enjoy constitutional immunity will be arrested and prosecuted in accordance with the relevant laws. 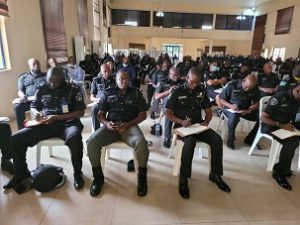 Police Officers and Heads of Departments at the POWA Hall, Oduduwa Ikeja-Lagos.

Odumosu however, appealed to the general public to be obedient and law-abiding as the command intends to exploit all constitutional means to curb crimes and criminality in the state. 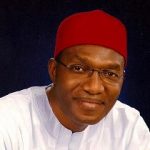