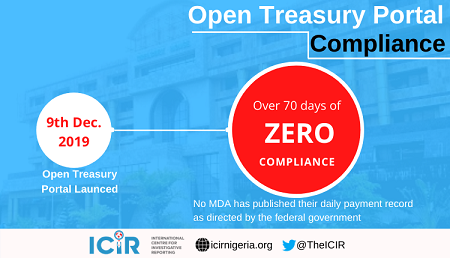 A civic advocacy society and accountability organisation on budget and public finance issues, BudgIT, says there has been some progress in fiscal accountability on the Open Treasury portal since the Transparency Portal Quality Assurance Compliance Committee was set up by the Federal Government of Nigeria (FGN) on August 6, 2020.

In a statement, BudgIT noted that following the launche of the Open Treasury Portal, to increase transparency and accountability in government spending, it released a report (https://bit.ly/open-treasury) in June 2020, titled “OpenTreasury.gov.ng: Nigeria’s Spending Platform: Review, Gaps & Recommendations” in which it analysed data uploaded on the portal from September 2018 to May 2020. 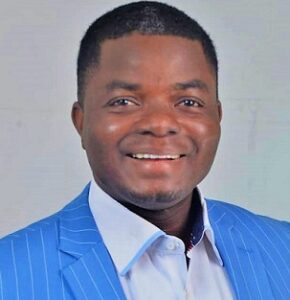 According to the report, between January and June 2019, over 2,900 payments were made into personal accounts while over 5000 payments worth N278bn did not have any description on the purpose of the payment. Subsequently, letters were sent to the government on the problems and gaps identified by BudgIT on the platform.

After the Transparency Portal and Quality Assurance and Compliance Committee was established to review the observed gaps and resolve the issues, BudgIT and CISLAC, two civil society organizations leading the advocacy for fiscal transparency and accountability in Nigeria, were nominated as members of the Committee. The Committee also includes other MDAs, ICPC & EFCC. The two organisation’s participation is at no cost to the federal government. 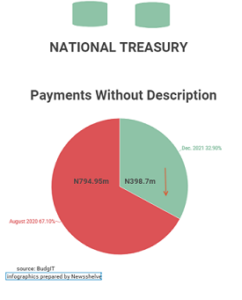 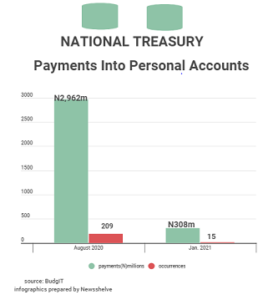 According the Executive Director of CISLAC, Auwal Rafsanjani, the payments made to personal accounts as observed by the committee during its first 2021 meeting increased from 277 in November 2020 to 336 in December 2020. “This seems to adulterate the progress that was recorded in the months before December 2020.

Also, in October 2020, a list of 44 transactions from 16 MDAs was handed over to ICPC representative for further investigation for non-compliance. However, despite ICPC’s intervention, we observed some consistent trends emerging from the ministry of Niger Delta and Humanitarian affairs with both having the largest share of defaulters in the last quarter of 2020.” Rafsanjani noted. 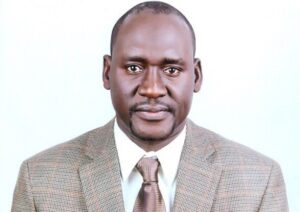 BudgIT’s Principal Lead, Gabriel Okeowo, also highlighted the importance of unveiling the list of those sanctioned to the public to serve as a deterrent to other civil servants and public office holders and a motivation for them to be more accountable in the use of public funds.

“While the platform is innovative and commendable, much work is still needed to achieve its goal of enabling public transparency and accountability fully as there have been downtimes and platform unavailability due to technical issues from the Service provider Galaxy Backbone, that designed, and manages the portal.” He said. 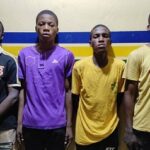 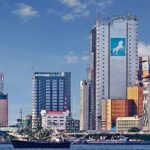