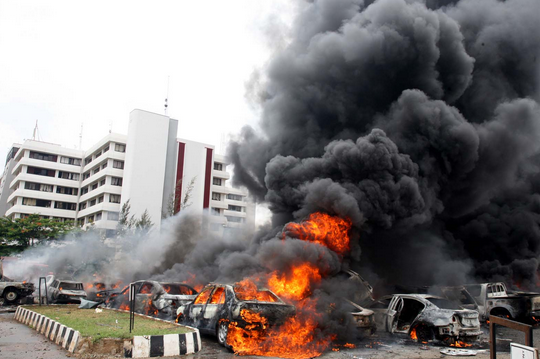 A brainstorming security forum recently convened by the National Association of Online Security Reporters (NAOSRE) in Lagos, has shed new light on how to effectively tackle the current insecurity situation in Nigeria.

NAOSRE, established on October 29, 2020, as the long anticipated authentic information bridge between citizens and security agents, comprises professional journalists, some of Nigeria’s finest hands in security reportage with strong media credentials, who have worked with the conventional media and are now reporting on digital platforms.

Within a short period, the Association has successfully established a sustainable working relationship with key security players in the corporate world and security agencies in Nigeria, including the Nigerian Army, Nigerian Navy, Nigerian Air Force, Nigeria Police Force and Nigeria Customs Service as well as the Federal Road Safety Corps among others.

Without doubt, NAOSRE’s influence in Nigeria’s security space was displayed at the event which has passed into history as a turning point in the annals of security discourse in the country. 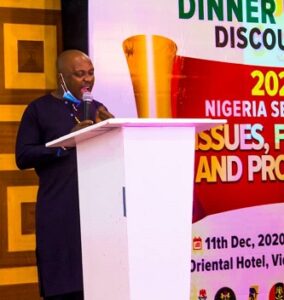 The Dinner Night and Discourse drew participants, guests and speakers from the safety and security agencies, the legislative arm of government, traditional leadership and corporate organizations and of course, the media––both traditional and the digital.

Interestingly, the evening of intelligent discourse with the theme: “2021 Nigeria Security: Issues, Funding and Prospect,” unlocked a plethora of security solutions and ideas and opened the window for set of suggestions that would enhance security policy formulation and implementations in 2021, in a manner that could make Nigeria one of the best secured countries on the continent.

NAOSRE’s President, Femi Oyawale, in his welcome address, set the tone for the event and provided room for elaborate sharing of ideas with a 360-degree view of Nigeria’s security apparatus. “Today’s security discourse was birthed out of the need to address the security issues in Nigeria, bearing in mind that 2020 has been a very tough year for citizens, businesses and indeed, the security sector,” he noted.

Oyewale’s remark was, unmistakably, the needed bullet that hit the bull’s eye, considering the various security challenges that reared up in the course of the year, culminating in the catharsis of the #ENDSARS protest. Representatives of the security agencies underscored the unique challenges threatening their efficiency on the job while informing the public about strides they have achieved in their respective organisations. 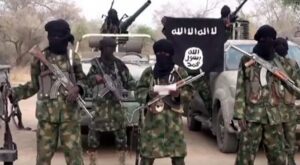 The Federal Road Safety Corps, FRSC, gave a detailed analysis of the use of hi-tech speed sensor to check recklessness of drivers on Nigerian roads, to secure road transportation in the country.

Superintendent Route Commander, SRC, E. Olasehinde who represented the spokesman for the Commission, Bisi Kazeem, commended the professionalism and resourcefulness of the FRSC Corps Marshal, Dr Boboye Oyeyemi, noting that the organisation has now embraced technology in all its operations.

He hinted that a drivers’ license issued by FRSC in Nigeria can validate user’s driving permission across many countries across the world and called for strict adherence to driving rules and codes by road user to mitigate the growing list of disasters on the Nigerian roads.

For his part, the National Public Relations Officer of the Nigeria Customs Service, NCS,  Deputy Comptroller Joseph Attah, gave a wide-angle view of the new developments in the service.  “We are not relenting but wiuld continue to do our best to drastically reduce smuggling to the barest minimum,” he assured.

The Customs Service PRO, Tin Can Island Port, Represented by  Uche Ejesieme, said the service has deployed intelligence in the discharge of its duties at all the country’s points of entry while calling for synergy among security agents in view of the multifaceted dimensions of border security. 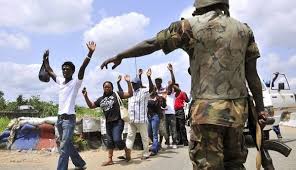 Nigerian soldier at a checkpoint

Superintendent Adebisi Adewunmi, who represented Customs Service he Commissioner of Police, Lagos State Police Command, Hakeem Odumosu, underscored the need to inject more funds into the nation’s security apparatus from military to the Police. “In Lagos, Policemen work 24/7, they are overstretched but with proper funding, everyone will sleep with their eyes closed.” He said.  Adewunmi acknowledged the positive development from the fallout of the #ENDSARS protest which has led to the promise of improved salary and retirement package while also noting that the work of the police is further made difficult by online mischief-makers who created unnecessary panic.

For the Nigerian Army, Acting Deputy Director, 81 Division Army Public Relations, Major Osoba Olaniyi, who represented the Acting Director, Army Public Relations, Brigadier General Sagir Musa, disclosed that the Nigerian Army is currently conducting internal security operations in 34 states.” He explained that the Army welcomes constructive criticism as a professional institution but would not accept aspersions because it has the tendency to weaken the resolve of those still fighting and dishonour the memories of fallen heroes which could undermine national unity.

Olaniyi, responding to concerns raised about members of Police and Army impunity when dealing with civilians affirmed:  “Irrespective of whatever uniform we wear, we still share the same humanity with members of society and we shall try to remain humane with you.”

Both Police and Army, however agreed that there are bad eggs among their operatives. “The military is still high on discipline, we still don’t condone indiscipline,” Major Olaniyi who speaks for Army formations in both Ogun and Lagos States, asserted. 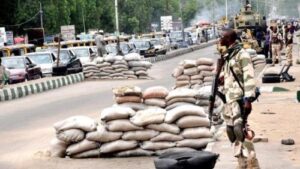 Soldiers at a checkpoint in Nigeria

He nonetheless advised the public to report cases of infractions to 81 Division and 9th Brigade of the Nigerian Army, noting that the Chief of Army Staff, Lieutenant General Tukur Buratai, has zero tolerance for indiscipline among officers and men especially relating to the general public.

Various speakers from the non-security sector further expanded the evening discourse as the veteran Nollywood actor, Dr Tony Akposheri, who represented the Grand Patron of NAOSRE, Honourable Ned Nwoko, pointed out that the public also has roles to play in the security of the country. “Our security personnel are not adequately well taken care of and the number of security operatives in this country is not adequate, we cannot leave everything to government. The security discourse is timely at this time of our nationhood.” He said.

Barrister Yinka Oguntimehin who represented Aare Ona-Kakanfo of Yoruba land, Otunba Gani Adams, dwelt on how the police institution has decayed over time. He recounted the heart-breaking revelations on a recent radio programme about the poor salary for policemen.

He also decried the dehumanizing condition of service Police officers are subjected to, starting with the barracks where they live which have degenerated into squalor, and the burden of providing the basic tools for their jobs to their uniform, beret and boots and even the charge sheets in their stations. While commiserating with the police force for the loss of its members during the ENDSARS saga, Oguntimehin observed that a better police service was what the youths had demanded. 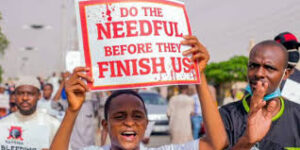 Although, the Guest Speaker of the event, Senate Committee Chairman on Air Force, Senator Bala Ibn Na’Allah, was unavoidably absent ––having had to fly back home earlier on that day as he was bereaved––he nonetheless made a vital contribution, through phone in, that became one of the main takeaways from the event.

As the participants listened, Senator Na’Allah said “A lot of issues need to be addressed if we must reverse the insecurity situation facing Nigeria.” He was blunt in holding the country’s elite responsible for the degeneration of security adding that there must be institutional commitment on the part of the government to curb some of the security challenges. “It has now dawned on everyone and government that there is an urgent need to address security issues affecting the country.”   He noted.

Other highlights of the night include messages of support from Speaker, Lagos State House of Assembly, Rt. Hon. Mudashiru Obasa, whose message was delivered by a Principal Officer of the House, Honourable Noheem Adams representing Eti-Osa I Constituency. Obasa, who is also the Chairman Nigerian body of Speakers, assured Lagos residents and Nigerians of the legislative’s resolve to contribute more towards a safer society. “As legislators, we are committed to our over sight functions to ensure that appropriated funds for military operations are judiciously utilized for its rightful purpose,” Obasa vowed.

From the traditional enclave His Royal Majesty, Oba (Dr.) Adeoriyomi Akeem Oyebo, the Obateru of Egbin Kingdom, Ikorodu-Lagos, also lend his voice to the NAOSRE’s security solution. He advised government across levels to consider the use of traditional methods to checkmate criminal activities.

“Some criminal elements, who, at times, over power security agents use traditional powers, why can’t government look at that direction and involve the traditional institutions? He queried. The highly respected Oba, supported his suggestion with a story of a popular traditional security man who once secured a bank in Lagos while residing in Ibadan, without being physically present at the premises. 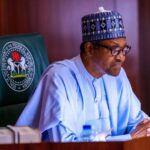 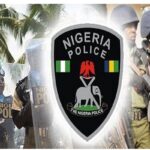