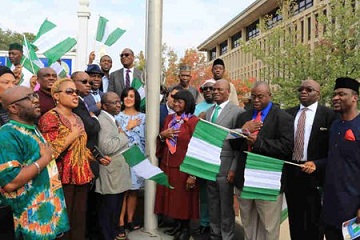 Nigerians in Diaspora are concerned over the worsening state of insecurity in the country. At a virtual conference organized by Naija Times in Lagos, participants, from London, Canada, United States and other countries of the world, decried infiltration of illegal aliens, arms and ammunition, ethno-religious conflicts and political violence, among others that have compounded the situation in Nigeria.

In his opening remarks, the convener and Publisher/Editor-in- Chief of Naija Times, Ehi Braimah, noted that it was the publication’s maiden conference which aims to reexamine Nigeria’s security challenges and offer implementable solutions for a safer country.

Discussants at the forum with the theme: ‘Nigeria’s Security Challenges And The Way Forward,’  admitted that the country is gravitating towards a failed state as a result of downward curves of economic indexes and  food shortages arising from the debilitating activities of kidnappers, armed robbers and insurgents.

Speaking, Toju Ogbe, a London based Communication strategist highlighted some of causes of insecurity in Nigeria which, according to him,  include; improper training of security personnel, inadequate funding and lack of political will to deal decisively with and insurgents and other criminal elements in the country.

Specifically, Ogbe decried the negative impact of insecurity which is affecting Nigeria’s economic growth noting the country’s unsafe environment is discouraging Diasporas from investing at home. “I refused to heed my sister’s advice on the important need to build a house in Nigeria realizing that this would not translate to any tangible gain if I build a house that I cannot safely live in.” He said

“For those of us in the Diaspora, we always look forward to a time when we would get old and relocate home to spend the rest of our life peacefully in our country. But that retirement plans don’t exist anymore because how does one retire into unsafe environment at old age?” Ogbe queried.

Some of the discussants were worried that, as things are, Nigeria may not remain the favoured destination for Foreign Direct Investment inflows into Africa, pointing out lack of commitment, insincerity and complicity of highly placed individuals as reasons that have hampered the fight against insurgents, a development they noted, devalues Nigeria as the leading economic heavyweight in the continent. 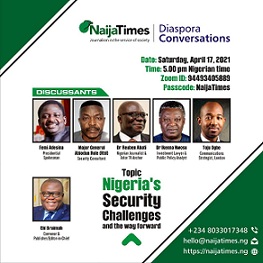 The discussants called for collaboration of leaders across board to tackle insurgency while urging the Government and security agents to up their game in wholesale intelligence gathering, effective security policies and implementation of innovative strategies to check the menace. 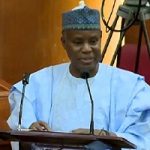 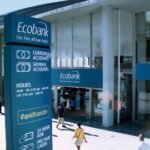