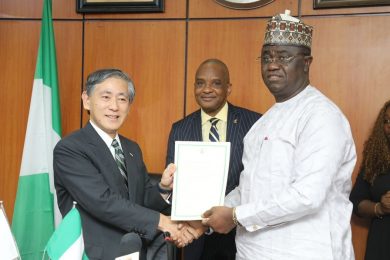 The Nigerian government has signed  an Exchange of Note(E/N) with the Japanese Government for an Economic and Social Development Programme involving the acquisition of High-Speed Boat to reinforce services for coastal security in Nigeria.

A statement from Nigerian Maritime Administration and Safety Agency (NIMASA) says the Minister of State, Federal Ministry of Budget and National Planning, Clem Agba, signed on behalf of Nigeria…

While the Ambassador Extraordinary and plenipotentiary of Japan to Nigeria, Kazuyoshi Matsunaga, signed on behalf of the Japanese Government, with the Director General of NIMASA Dr. Bashir Jamoh in attendance.

According to the statement, NIMASA will serve as the implementing partner of the deal.

Agba noted that the procurement of the High Speed Boat worth $2.78 million dollars, will greatly enhance the operations of the Deep Blue project.

He commended the Japanese government for their interest and interventions in Nigeria for Economic development.

“This project to strengthen the operations of NIMASA will definitely strengthen the partnership between the Government of Japan and Federal Republic of Nigeria.”

“Nigeria also appreciates the recent exchange of notes we signed for Emergency Improvement of Electricity Supply Facilities in Abuja, and the role Japan played in the development of the National Power Development Master-plan designed to guide the Government on the optimal energy mix and efficiency for Nigeria”. The Minister said.

On his part, the Director General of NIMASA Dr. Jamoh, assured the Japanese Government that the Agency working with relevant stakeholders will sustain the recent success in the war against piracy in Nigerian waters and the Gulf of Guinea.

In his words: “This High-Speed Boat is a welcome addition in our growing arsenal of platforms and assets to reinforce service for coastal security, not only in Nigeria but also in the Gulf of Guinea, as over 60% of shipping activities in the region pass through Nigerian waters”.

Ambassador Matsunaga explained that the project is to support the measures adopted by the Nigerian Government to deal with the threat of the blue economy, to prevent and suppress piracy, armed robbery, and any other unlawful act against ships in Nigerian waters.

Economic and Social Development is one of the guiding principles of the Tokyo International Conference on African Development (TICAD).

The people and Government of Japan hope this project will enable NIMASA reinforce their operations and services for coastal security in Nigeria, strengthen Nigeria’s counter piracy efforts and prove useful for the security of the Gulf of Guinea.” He added. 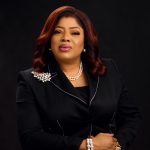 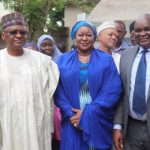