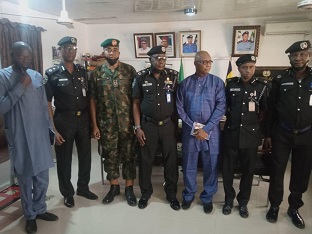 The new 6 Brigade Commander in Jalingo, Brigadier General  Mabekowu, is seeking the collaboration of the Commissioner of Police in Taraba State, Ahmed Azare, with regards  to intelligence sharing.

A statement signed by Police Public Relations Officer (PPRO), Taraba Police Command, DSP David Misal, said the State Commissioner of Police hosted the newly posted Brigade Commander in his office while on a courtesy visit to the Police Command.

According to DSP Misal, the courtesy visit follows the establishment of the 6 Brigade in Jalingo by the army headquarters, Abuja.

Brigadier General Mabekowu told the police commissioner that the purpose of his visit was to familiarize himself with the command and seek collaboration, synergy and intelligence sharing between the police and the military.

“The military recognizes the vital role of the Nigeria police in internal security and needs the support of the police in all angles in order to achieve its mandate.” He said.

The General assured the CP that he will do all it takes, within the shortest possible time, to get the new Brigade working even with the deployment of other staff officers from the National Headquarters.

Responding, Azare noted that his Command has been working cordially with the military in the state and assured the August visitor that the command will continue to do all it takes to strengthen the relationship especially in intelligence gathering and sharing. 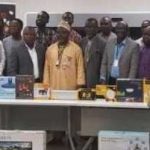