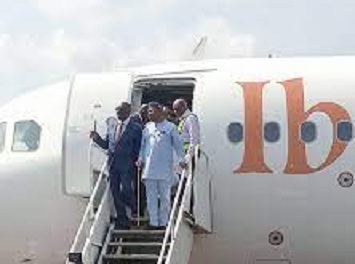 Uyo–Governor Godwin Obaseki of Edo States has described Akwa Ibom State as a pride to Nigeria given its exploits in the aviation sector.

Obaseki stated this while inaugurating two Airbus A320-200 recently acquired by the State Government to increase the numbers in the fleet of Ibom Air to nine planes.

“Even Nigeria as biggest country in Africa cannot run an Aviation sector successfully. Ibom Air is always fully booked. Let me thank you on behalf of Nigerians. Don’t be deterred by insult, focus on your goal,” he said.

In his welcome remarks, Governor Udom Emmanuel said his administration has committed huge resources to the development of the aviation sector in the state.

He said he had committed more funds than received from the federal government to the development of the state, even as he was at the verge of commissioning a world class Terminal Building and a Maintainance, Repair and Overhaul facility at the airport.

In his words, “We did not come to give excuses, we came to do governance. Look at what we have done in the aviation sector, if it is not more than what we have collected, then you can challenge me anywhere.

“Our terminal building is world class in Africa, our MRO is world class. If you find one today in the entire Gulf of Guinea, tell me I will break down this one and construct another. This MRO can take 24/47 800 series, could service eight of the CRJs that we are flying at the same time. This is the only MRO in this part of the world. People are coming, asking us to lease this MRO.

“I invest in areas we can have return on our investment. Airbus is on us to come and use our MRO for all their regional flights. We are going to open up this place from January next year for commercial activities and we are going to earn in dollars, not Naira”, he said.

He said the new addition to the fleet of Ibom Air would not only expand it carrying capacity but would also boost employment opportunity by 40per cent.

Earlier in a release, the Chief Operating Officer, George Uries had earlier hinted, “With this new capacity coming on board, we are delighted to inform our passengers that we have increased our offerings, providing more frequencies for their convenience.

The two Airbus A320-200 aircrafts were said to have been procured from GetJet Airlines UAB (operating as GETJET), a European aircraft leasing company, on a one year wet-lease agreement. The new addition brings the fleet to seven Aircrafts; five (5) Bombardier CRJ 900 and two (2) Airbus A320-300, covering seven (7) destinations. 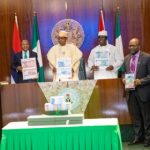 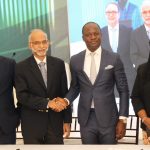