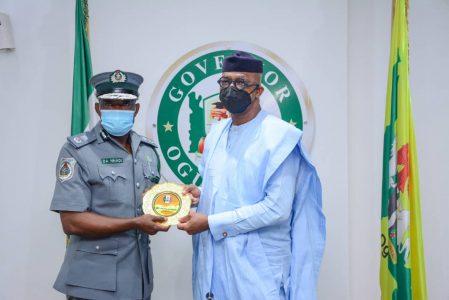 The newly appointed customs Area controller, CAC, Ogun Area one command, Comptroller Dera Nnadi has promised to form synergy with the Ogun state government towards ending incessant clashes between the personnel of Nigeria Customs Service (NCS), and the people at the border posts in the state.

The synergy according to the customs area controller would help to facilitate trade and also promote peaceful coexistence among the people.

Comptroller Nnadi gave the assurance during the week when he paid a courtesy call on the Ogun state Governor, Prince Dapo Abiodun at his office in Okemosan, Abeokuta.

The customs boss who described the state as  important for not only being a gateway to the nation but a trade route that cuts across the country, noted that the state also serves as the fourth largest contributor to the nation’s Gross Domestic product (GDP).

According to Nnadi, “Ogun State, through Idi-Iroko has served as a trade route between Nigeria and Benin Republic for long, but has now become a war zone as a result of smuggling activities.”

He said though he was in the State to enforce the Federal Government policy, he was ready to change the negative narratives by ensuring that his men observed the rule of engagement by exercising restraint when dealing with people and cautioned against unruly behaviour by the people against Customs men to forestall skirmishes.

The Custom boss assured that his command would work with the State government by not allow any incursion into the nation’s territory while calling on government to look into the ‘Igholofi’ issue which has not been resolved.

While soliciting the cooperation of the people of the state in order to surmount the herculean task ahead, Nnadi explained that the reason behind the visit was to intimate the governor about his plans and to seek his support to put an end to the sour relationship between Customs personnel and the people of the state

He warned the residents to desist from attacking customs officials while preforming their statutory duties, noting that ” it is always difficult and dangerous to attack a man carrying a gun” adding that “all hands will be in gloves in ensuring that peace reign at the border posts’.

For his part, Ogun State Governor, Prince Dapo Abiodun in a response called on men of the Nigeria Customs Service, to discharge their duties with human face by being civil when dealing with members of the public

Abiodun noted that it is only when the Custom men treat people with dignity that they would cooperate with them.

According to the governor, “please find a way to discharge your duties with human face. Be civil when you are dealing with the people to minimize loss of lives. It is only when you treat people with respect that they will cooperate and give you the support that you need to carry out your assignment.”

He continued “the Customs must change the rules of engagement. You cannot engaged in shooting in the markets or on the roads, which in most cases result to death, and expect the people to cooperate with you. This actions lead to mistrust. People are going through hard times and there is pent up anger everywhere. So our law enforcement agencies need to exercise restraint when enforcing the Law.”

The Governor noted that people in the border areas have lived and engaged in trans-border commercial activities for long, saying that some recent policies of the Federal Government which the Nigeria Customs are expected to enforced, have led to skirmishes between the Customs and the people, which usually resulted to casualties.

He expressed delight that the new Customs’ boss who has worked in the State before his appointment, came up with a mission aimed at changing the narrative of incessant clashes as a result of smuggling activities while calling for truce between aggrieved residents and customs personnel.

Speaking on the incursion into Nigeria by one of her neighbouring country, the Ogun State helmsman said the State has met with the Attorney General of the Federation and Office of the Vice President which is in charge of border matters on the issue, stating that it was imperative to put a stop to frequent harassment of the people of the State by foreigners.

The governor assured the customs boss of his utmost support in discharging his duties diligently and effectively adding that it was part of the vision of the current administration at the gateway state to put in place a proactive security arrangement for the safety of people working and living in the state being the industrial hub of the nation. 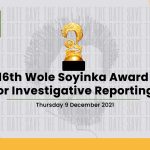 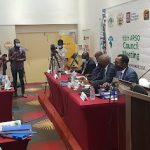