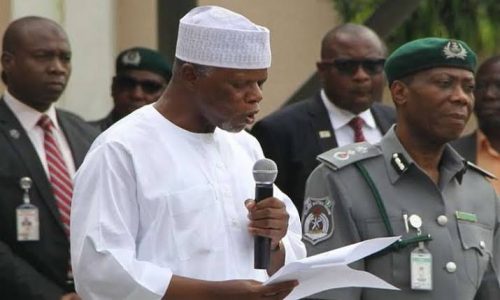 The Nigeria Customs Service (NCS) is forming alliances with the Nigerian Immigration Service, the Nigerian Army, Nigeria Police Force and other security and intelligence agencies to curtail terrorism, banditry and other transborder crimes to make the country secure.

The Comptroller General (CG) of NCS, Col. Hameed Alli, stated this at the maiden edition of Port Industry Town Hall Meeting with the theme “Towards Hitchfree Port Operation in Nigeria” organised by Journaling.

The CG who was represented by Deputy Controller Kikelomo Adeola, DC in charge of revenue at Tincan Island Port command of the NCS, said the service is well prepared to handle every form of transborder crime.

The collaboration according to the CG is to function in four geo-political zones adding that the synergy would be coordinated by the office of the National Security Adviser.

In his words: “Nigeria Customs Service is partnering the Nigeria Immigration Service, the Armed Forces and the Nigeria Police Force as well as all security and intelligence agencies to conduct joint border security operation for quick response coordinated by the office of the National Security Adviser in four geo-political areas.”

“The South South, the South West,the North Central and the North West to promote inter agency collaboration and addressing transborder security challenges such as terrorism, armed banditry, smuggling and proliferation of light arms and small weapons.”

He acknowledged the efforts of the federal government in acquisition of scanners at the ports to facilitate trade in the ports.