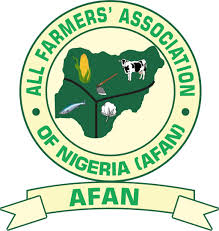 -by our correspondent.
The All Farmers’ Association of Nigeria (AFAN) has obtained a court injunction from a Federal High Court in Kano, stopping, Mudi Farouk Rabiu, from further parading himself as the president of the umbrella farmers’ body and holding any activity in the name of AFAN.

The Mudi led breakaway faction had illegally usurped the authority of the association at the national level without grassroot support and in violation of the association’s constitution, to the extent of gaining recognition from the minister of Agriculture and Rural Development, Sabo Nanono, who did not heed to appeals from the bona fide executive to disregard him.

In a statement made available to the media, the Assistant Publicity Secretary of AFAN, Salisu Mukhtar, noted that: “the desperation and misadventure of the lawless group led by Faruk Rabi’u Mudi and his fraudulent obtuse supporters have led them to earn the wrath of the law in Kano.”

According to Murktar, on Monday, 16th August, 2021 the Mudi led group organized a charade at the Sani Abacha Indoor Stadium, Kano to illegally conduct the election of officials of AFAN Kano State chapter, before the injunction which was issued on the 18th August 2021.

According to him, “The group boastfully announced that they would be on air to be seen by the whole world. This was regardless of the pendency of a matter they filed in the Federal High Court, Abuja, slated for definite hearing on 27th September, 2021.”

“A law-abiding group would wait for the determination of the matter before proceeding to do anything but because they are bereft of decorum and good education they landed themselves in a serious quagmire.” The statement read.

Recall that the All Farmers Association of Nigeria Kano Chapter illegally registered by Mudi which was used to open a fresh bank account in Heritage Bank was disapproved by the Corporate Affairs Commission (CAC).
AFAN has continued to flay Heritage Bank for allowing the illegal account which was opened without due diligence to remain open and deployed in fraudulent activities which Mudi has been accused of by third parties.

According to Murktar, AFAN had earlier written to the management of Heritage Bank on the 14th of February 2021 on the illegality of the account opened with them in the name of a fake entity claiming to be AFAN.
The letter read in part: “We write to inform you that your Branch has inadvertently opened an Account: All Farmers Association of Nigeria (AFAN), Acct. No.5100311787 without due diligence.

“All Farmers Association of Nigeria Kano Chapter is a nullity as the CAC (Corporate Affairs Commission) has issued a letter dated 22nd June, 2020 (copy attached) to them to change their name within six weeks or it will be cancelled.

“We implore you to close this account forthwith because it has been opened to defraud the All Farmers Association of Nigeria (AFAN) and all Nigerian farmers.”
AFAN further disagreed with the minister for permitting Mudi to give a goodwill message at the Council on Agriculture conference held in June 2021, where the police soon moved in to arrest him over a criminal matter but was shielded from the arrest by the minister.

“We are looking up to the police to ask Alhaji Mohammed Sabo Nanono to produce him since he has not been seen in his office since June,” Murktar said.

The association noted that the injunction secured from the Kano Judiciary has finally clipped the wings of the renegade faction and their leader Mudi from parading as members or representatives of AFAN anywhere, warning that anything that the group received in the name of AFAN from the ministry of Agriculture for AFAN members nationwide should hitherto be accounted for.

“We reiterate that anyone who transacts any AFAN business with Faruk Rabi’u Mudi does so at his own peril.” 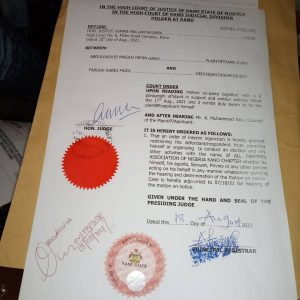 The Faruk faction had earlier advertised a paid registration platform for farmers with the promise of accessing micro-credit loans, benefitting from Alhaji Salisu Mukhtare their names, states, and commodity they produce, while making the payment.

However, the executive led by Arc Kabir Ibrahim had insisted that Mudi is not a member of AFAN but a fraud. 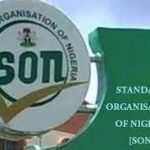 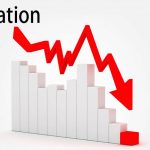