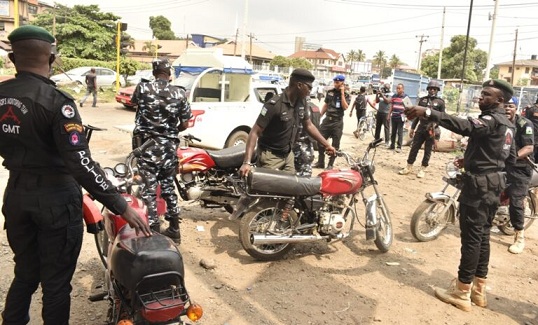 The Lagos State Police Command is intensifying its war against criminality and abuse of traffic laws in the state.

To this end, the State Commissioner of Police Hakeem Odumosu, has directed operatives under his command to go after unregistered vehicles, those with covered numbers plates, fake number plates and those who use siren without authorization.

In compliance with the order, the police operatives have been lying in wait for violators even as the Response Squad (RRS), a unit of the Lagos State Police Command, over the weekend impounded three (3) vehicles for covering their number plates and forty three (43) motorcycles for plying prohibited routes in Alausa Business District, Ikeja. 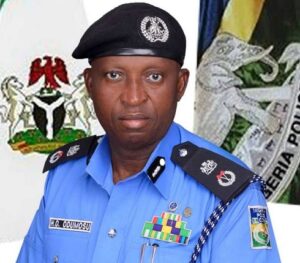 Recall that the Commissioner of Police had earlier warned vehicle owners against the acts of illegality towards the end of year 2020 following intelligence gathered on the planned usage of these categories of vehicles and motorcycles for committing crimes in the state.

Odumosu has however ordered that the impounded three vehicles and 43 motorcycles be transferred to the Lagos State Taskforce on Environmental Offences without delay for prosecution.

In a similar development, the Lagos State Environmental and Special Offences Enforcement Unit (Taskforce) has impounded over 100 commercial motorcycles as part of efforts to reduce accidents on the roads in the state.

The Chairman of the task-force, Shola Jejeloye, who disclosed this in a statement, said the discouraging high figures of motorcycle accidents and the compelling need to enhance safety on Lagos roads led to the action which is in compliance with the State Transport Sector Reformed Law 2018. 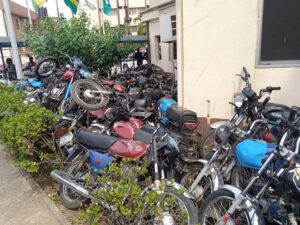 “We impounded these 100 notorious illegal commercial motorcycles around Navy Town, Alakija, 2nd Rainbow and Festac Town. The enforcement operation is carried out to halt the abuse of traffic laws by motorcycle operators who use these motorcycles as a means of escape after perpetrating criminal activities.’’ He said.

The Task-force Chairman added that the influx of these illegal motorcyclists into the state without any traceable address and valid means of identification, remained a huge security and safety threat to residents. He solicited the cooperation of all residents in providing useful security information about criminal activities to security agencies through the Lagos State free Emergency Toll Lines 112 or 767. 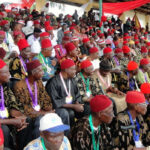 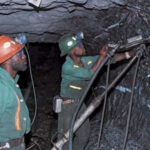