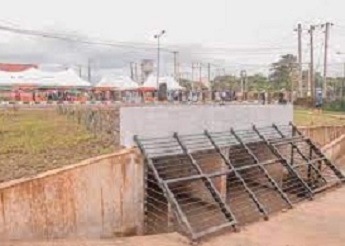 The  flood control scheme initiated by the Akwa Ibom State Government in partnership with World Bank through the Nigeria Erosion and Watershed Management Project (NEWMAP), transverses 18 communities in three Local Council Areas of the state and is designed to carry  more than half of the flood water generated  in Uyo and environs.

Speaking shortly before commissioning the IBB flood control project in Uyo , Okowa applauded Governor Udom Emmanuel for his courage to undertake a project that may not score much political points, as billions have been buried underground.

He said it takes a leader who sees beyond the presence to commit huge resources to arrest a problem that may negatively hunt the future, but without the visibility to leave much trace for recognition and applause in the near future.

“This project is huge. I have had to undertake a flood control project and i know that the amount you put here would do several kilometers of roads.

“It take a bold and courageous leader to do this because after sometime, people would forget what was buried underground. So, only great men who look into the future would do this”.  He said

He commended Akwa Ibom youths for working side by side with government to achieve great things and expressed optimism that such disposition will continue to attract growth and development for the state.

Okowa who further applauded Governor Udom Emmanuel for providing 10 alternative sources of water for communities on the line of the project, declared such an hallmark of a leader who cares.

He therefore expressed his conviction that Governor Udom Emmanuel has all it takes to export his courage and greatness to the entire country in his capacity as Chairman of the PDP presidential campaign committee.

for partnering the state in arresting the perennial flood problem, which he reported had sacked many landlords and residents of the affected communities.

Governor Emmanuel said ecological and flood challenges across the state were revealed to him during his tour of the state in his early days in office, though discouraged by experts and stakeholders at the onset.

“I was advised to leave this project that it has been there over the years. I told them i do not run away from challenges, i take them headlong”. He said

Giving a breakdown of the project, the Commissioner for Environment and Solid Minerals, Mr Charles Udoh said the IBB Intervention is meant to provide a permanent and comprehensive solution to the problem of perennial flooding in the surrounding communities.

“It was done through the construction of a combination of underground and open reinforced concrete storm water drains spanning about 8.4km and designed for a total discharge capacity of 80.43m3/s”. He said. 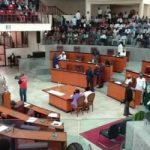 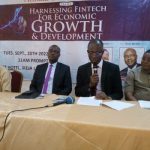